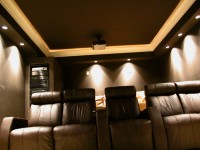 I’ve been wanting to post a photo album on my website for a few years now. I finally got around to doing it. For now, there are just pictures of my 2 home theater projects. The pictures cover the projects from start-to-finish (well, almost finished, I’m not quite done with the latest).

My first home theater was in my first house and was more of a media room because it was in a huge basement room with a bar and pool table. Nicole and I moved about a year and a half ago and went with a dedicated home theater for version 2.0. I still have to finish the front stage and the trim around the equipment rack. I’m close enough to being finished to knock it out in a weekend or two, but I’ve enjoyed watching it too much to work on it!

We came up with a name for our theater. I think it’s stupid to name a room, but we did anyway (even though we never call it that). Our first home theater was accented by two large "towers" covering in the speakers on either side of the screen. The second Lord of the Rings movie was in theaters, so our theater took on the name "The Two Towers Theater". We’ll probably add tower covers to our current (version 2.0) theater, so the name will be a little more fitting for it at some point in the future.

For anyone interested, I used JAlbum to create the photo album. It works pretty well for a Java program but I would like it better if it worked more like a standard Windows program. It’s free and gives a great finished product, so I shouldn’t complain.