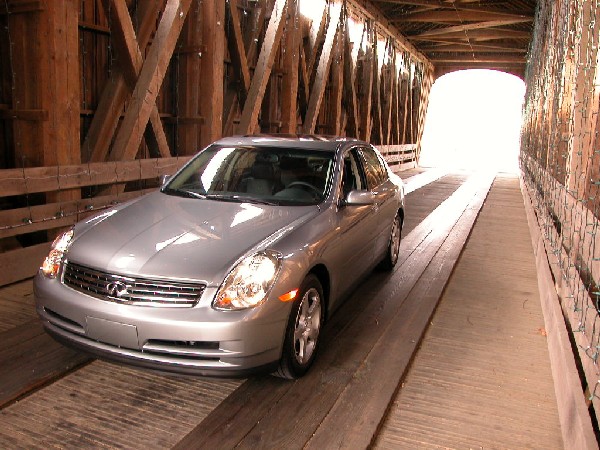 I ordered my car from Dryer and Reinbold Infiniti in Indianapolis. After three different test drives over the period of a year, the dealer accepted my offer via phone on Monday, September 8, 2003. My car arrived on Wednesday, Nov 19 and my wife and I drove to Indy to pick it up the following Saturday, Nov 22, 2003. It’s since been the most reliable car I’ve owned and the one in which I’ve driven the most miles.

Out of Warranty Repairs

It seems like I have to tweak about everything I buy, at least a little bit. Here’s my modification list.

Other upgrades that I considered but never completed:

Infiniti – official web site
FreshAlloy – a website and forum devoted to all things Infiniti and Nissan
G35Driver.com – website and forum devoted specifically to the G35 Sedan and Coupe. Forums are sub-divided more than FreshAlloy forums, making answers and topics easier to find.
Infiniti Tech Info – For $20, get a one-day pass to download the current service manuals for your Nissan or Infiniti vehicle in PDF format.
Grubbs Infiniti – Great dealer for online parts ordering. Located in DFW, Texas.
InfinitiPartsUSA.com – Best source for finding the exact OEM replacement parts for your Infiniti.