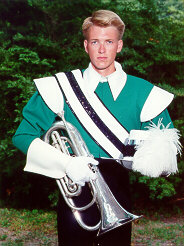 The following list contains some of my reflections on the 1993 season.

I only marched one season. I would have liked to have gone back for another but I had to get on with school and the rest of my life. It’s amazing how everything else stops when you make that commitment to marching. 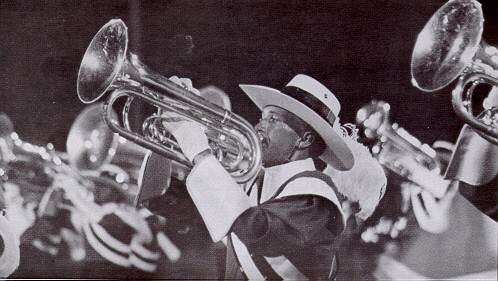 Here is a picture of me during a show way back in 1993. It was the darkest tan and lightest hair color I ever had. 12+ hours a day in the sun will do that. Here are some more pictures.

To hear the entire show and shows from past years, you can order the Planets to Planets: 1985-1995 CD from the Cavaliers Web Site.

Sights and Sounds from the ’95 Season

Audio Clip:
The opening section of The Planets by Holst (159 KB mp3)

Many people are unfamiliar with Drum and Bugle Corps. First of all, it’s not exactly a marching band. Yes, there are similarities, but the musicians with a corps are all brass and percussion, the shows are much more physically demanding, and the amount of time spent practicing is much higher. Generally, the shows are considered to be the best of their kind,.

Here are a few specifics regarding drum corps:

The schedule of a typical day:

How much you are paid:

The the bugles – the brass instruments

General Info about how I got into playing the Baritone/Euphonium:

I first had musical aspirations in the the 6th grade when I became curious about playing the trumpet.  When I had my audition for Junior High chorus, I purposefully sang terribly so that I would not be picked for choir but rather could choose band as my musical elective.

I joined the band in 7th grade and started playing the trumpet.  I was not that great and I soon received braces, making the trumpet even more difficult to play.  So, I switched to the baritone / euphonium in the 8th grade.  I still was not great and continued that streak until the end of 9th grade.  At the end of the year, the two seniors (Joe and Lorie) graduated and no one but me was there to play the baritone part, so I practiced a little.  I remember Lorie (at least I guessed it was her) placing her hand my shoulder as she passed by me during the processional march.  It felt like a passing of the torch, so I decided to practice even more.

That next year, I really learned how to play and took on more of leadership role.  I joined the church orchestra and the pep band and was picked to play a solo in the concert band.  During my Junior and Senior years, I gained some more skill, did some more solos, made the All District and All State bands , and received a small musical scholarship to the University of Louisville.  I played in the Concert and Symphonic bands for 4 years but focused on my major, engineering.  I also devoted a summer to Drum Corps, marching for the Cavaliers.

Since graduating from college, there hasn’t been a lot of opportunity to play the euphonium.  In fact, demand has been zero.  I decided to buy an acoustic guitar to channel my musical energies but I guess I just don’t have too much energy left because I can still barely play.  Hopefully, I’ll find some more time to devote the the six string and enjoy playing an instrument the way I used to.  I don’t think I’d be where I am today without the benefits from the experineces I gained from playing and performing.